Sunday mornings is one of my favorite times....as we just have a tradition. (I am not saying routine as that sounds mundane and Sunday mornings isn't mundane). We start our morning out by making breakfast together. It started because when I first moved here - there were a few breakfast things that I couldn't make but he could. Such as I couldn't fry an egg nor could I make "round" pancakes. I can do both of those things now but our tradition stuck so that we make breakfast together every Sunday. Though I have to say he is the one who mostly makes breakfast on Sunday. It is something he likes to do and just has some Sunday brunch specialties - that are just his thing. So I asked if I could share one of his Sunday recipes. When his family camped as a boy, they had this dish. They called it One pan but we use more then one pan when making it.

It isn't much of a strict recipe but more like guidelines. It is so easy to make variations of it too. 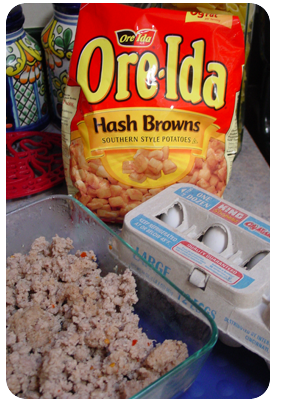 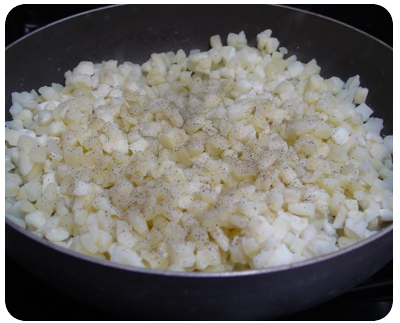 Prepare hash browns according to skillet directions on the package. Season with salt and pepper. 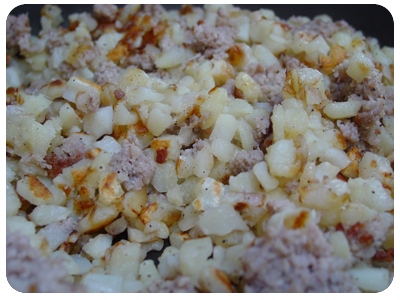 When the hash browns are mostly browned, add the cooked sausage. 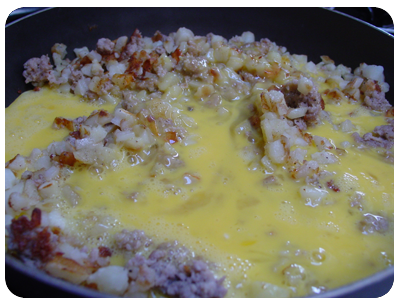 Beat 12 eggs and pour over hash browns and sausage. Stir in and allow to cook. Stir every so often until finally cooked all the way through. 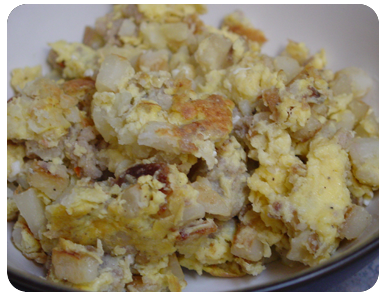 Serve! I like to serve in bowls with a little cheese on top. But also some salsa tastes good too.

A good variation is to saute onions, mixed bell peppers and mushrooms and mix in when adding the sausage. Or use ham or crumbled bacon. It just is easy to make this into whatever sounds good.

Serves 6 people. We have left overs for breakfasts during the week.