I am a little OCD when it comes to loading the dishwasher - okay maybe more than a little. I like it all to be put in a certain way as it maximizes space and creates easier routine for unloading.

One of my little tips for loading the dishwasher is sorting the dirty silverware as I load it into the silverware rack in the dishwasher before running it. It makes unloading it so much easier. So all the forks go in one compartment, all the spoons in another, and so on and so forth. 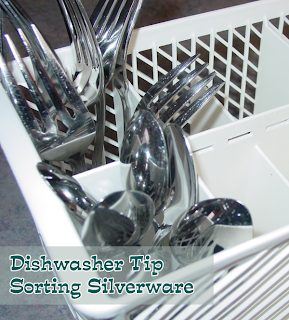 Bonus Dishwasher Tips
*  Vinegar - Run your dishwasher empty, but dump a cup of the distilled white vinegar in the bottom of the dishwasher.  Set to a normal cycle and let it run.  It helps clean old smells and particles out of the dishwasher as well as disinfect it.  I do this every 4 to 6 weeks.

*  Hot Water - Turn your faucet on and let it run until it is hot water is flowing. If you turn on your hot water faucet and it takes a moment to get hot, then it is same for your dishwasher. By running faucet and get the hot water flowing, then the pipes are filling with hot water.

* Dishwasher Soap -  About 2 years ago I tried a homemade dishwasher soap, but it didn't really work well.  So I ended up going back to store-bought detergent.  One thing I did change when going back to store-bought detergent was cutting back on the amount of detergent I use.  I fill the compartment about half way to less than half and now my dishes have less spotty build up and still clean.
Posted by danae @ 2:08 PM No comments:

I have meltdowns every so often.  It happens when I am overtired, overly busy and stressed.  I am not sure why I choose to make a new recipe when I am already having those kinds of obstacles, but the first time I made this recipe - I made it much more complicated than I should have because I skimmed the recipe and didn't actually read it before making this dish.  I almost always read recipes all the way through, but of course being overwhelmed with life made me skip that step and caused further issues.  I had a total meltdown in the while cooking when I realized I skipped a step/ingredient.  In the end it still turned out tasty, but it caused more headaches then I needed.  Master always loves walking into the kitchen with a hysterical crying slave (that was sarcasm).  Anyway, I am seriously happy I tried this recipe again after the meltdown because I really love the flavor of this dish. It is so pretty to look at as well as eat. We have had it several time and every time we have it, I am amazed by the flavor. 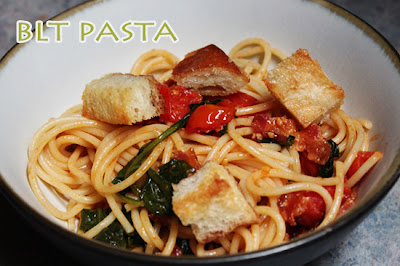 Garlic Croutons  - made mine but store bought would work

Cook pasta according to package directions. Drain and set aside.

Saute the bacon in a large skillet over medium heat.  Cook until crisp, then set aside on paper towel.   Reserve 2 tablespoons bacon drippings, and drain off remaining oil.

Caramelize the tomatoes and sugar in the bacon drippings in large and deep skillet or sauce pan, over medium heat.  Cook until tomatoes begin to soften and brown, approximately 3 minutes.  Add the leeks and cook for an additional 3 minutes, or until leeks soften.

Deglaze with wine and allow sauce to simmer until the wine is nearly evaporated and sauce is thick.  Add the broth, vinegar, and pepper flakes.  Simmer until reduced by 1/3, approximately 5 minutes.

Add the spinach, and bacon to the sauce, then add the cooked pasta.  Toss lightly until pasta is well coated with sauce and tomato mixture is incorporated.  Season with salt as needed.  Top each serving with garlic croutons.

NOTES:
* Although I think deglazing always makes flavor more deep sometimes I skip deglazing steps and really in this case I think the caramelizing adds the depth of flavor to the tomatoes.  So if you don't want to deglaze - you could up the chicken broth just a bit and skip the deglazing step.  Need to up the broth, because if you skip the wine step you still need a little more liquid for sauce in the recipe.

* I am leaving 2 cups of spinach in the recipe, but I will say the last few times I have made this I have upped the spinach to 3 cups and like having more green in it.  Really doesn't change flavor - just getting more green in the diet.

* If you don't have leeks, green onions work in a pinch too. 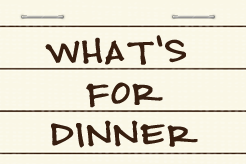 Mon - pasta tossed with pesto and steamed veggies - side salad

Sat - we got home late afternoon from being out of town so not really up for cooking so made some Egg in a hole for us sprinkled with green onions and cheese.

Mon -  baked pork chops (coated in dijon and then sprinkled with panko), steamed veggies and side salad

Sat -  panini with ham, spinach and gouda cheese served with a side salad

Tues -  Cashew Chicken, steamed rice with peas and carrots in it and a side salad

Wed - Sat - out of town (though I did make and bring wraps for Wednesday night's dinner - wraps with grilled chicken, bacon, cheese, spinach, tomato and dijon mustard)

Thurs - Taco pie* served with steamed veggies and a side salad

April 28 - May 4
Sun - Meatloaf (made from ground turkey and lean ground beef), mac-n-cheese, steamed veggies and a side salad

Tues -  alfredo with chicken and broccoli served with side salad

Wed -  out for dinner

Fri -    steak fajitas, easy spanish rice and a side salad

Sat -   tuna melts and a side salad

We try to eat a salad with every meal. It helps fill up and it gets some greens in us.