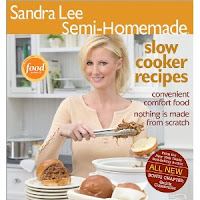 at the library and I am glad I did that instead of buying them. I am okay with Sandra Lee's show on Food Network. I think lots of people make things complicated when they don't have a lot of time and she offers some short cuts that I think are worth the saved time. 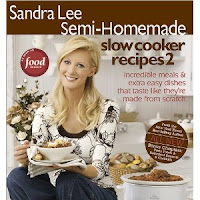 * many ingredients I can't find in the grocery store. Such as she will say to buy a certain brand of seasoning or bottle of salad dressing and our stores don't carry that.
* As I mentioned above she uses name brand items. I wish she would have just said use fajita seasonings or whatever kind of seasoning instead a certain brand.
* trying to substitute some of the ingredients for whole ingredients instead of frozen onions I used a fresh onion.  But often those kind of substitutions seems to ruin the recipe - how I am not sure that is possible, I would think it would taste similar but often the recipe just didn't turn out.
* many recipes don't turn out even if following the ingredient list exactly


What I do like about these books:
* Tips she offers for slow cooking
* Ideas...I have used recipes in these books to create new recipes that work for me.  Such as the Turkey Cutlets with Green Chili Scalloped Potatoes. Many of the ingredients on her recipe for that recipe,  I couldn't find and I wanted to not do turkey cutlets but just shredded turkey so I made a new recipe from the idea of that recipe.
* Some of her short-cuts using bottled or canned things I do like when I am needing to save time.

If you like Sandra Lee's show, you might like these cookbooks. If you don't like her show and are more about using whole ingredients, then I would probably skip these cookbooks unless you want to get ideas and substitute whole ingredients to make your own recipe. Over all I am glad I picked them up and took a look at them as they did give me some ideas for the slow cooker even if they weren't the exact recipes in the cookbooks.
Posted by danae @ 9:35 PM