Book Review: You've Got It Made: Deliciously Easy Meals to Make Now and Bake Later 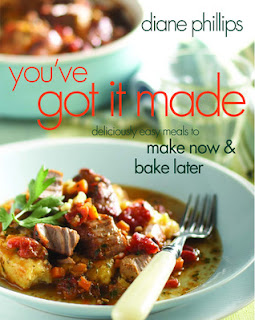 When I have checked a book out from the library more than 3 times, I think it is time to just go ahead and buy the book.  This book is one I should just accept, I need it among my other cookbooks.  This book's concept is right in the title make it now and bake it later.  It isn't necessarily a freezer recipe cookbook, but many of the recipes in do have freezer instructions. But some recipes are just to make and bake a few days later which helps when you know your week is going to be busy.

The main reason I keep going back to this book is that it has such a variety of recipes that are different.  Most of the make now and bake later type cookbooks seem to be making a big batch of something and then dividing it up and sending it to the freezer or the recipes use similar ingredients and base all the recipes off those main ingredients.  This book just gives you good recipes and tells you what to do to freeze it or just bake it later.  Every recipe in the book to me is guest ready too. Meaning it is perfect to serve for company or give as a gift to someone that ill or just busy and not able to whip up a good home cooked meal.  Many recipes do have a basic recipe and then variations, but still they are so different from what I normally read in these type of cookbooks.  It also has DIVA notes all along the way to give extra tips in making each dish.


What I don't like about this cookbook, not every recipe has worked how written for me.  I have had the majority of recipes work, but a few that I had to improvise to make them work.  This cookbook also doesn't have photos which is typical of Diane Phillips cookbooks.  I wish there were photos, but I do know it is cheaper for publishers to not to have them, but I would really love to see how some look before making.

Overall again, I think this is a book I want even though I have had some adventures in working out a few recipes, the majority are great.

Often the recipes say use a 9 x 13 and I just use two 8 x 8 since there is only 2 of us and bake one right away and freeze the other for later.  It has worked out really well for me.

This recipe I am going to share is one that I make quite a bit and also have given away as gifts during the holidays as well as given to friends   who were just coming home from the hospital.  It is always given really good reviews and it is so easy to change it up and use different ingredients.

The books original recipe is for an Egg Strata and then offers many variations such as one called Roasted Tomatoes & Mozzarella Strata.  Basically I have taken that recipe and made variations of it now many time. 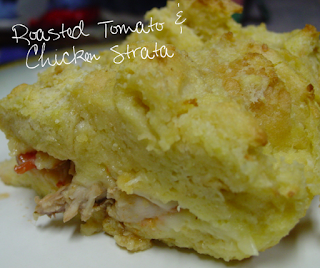 So here is my adaptation of the Egg Strata....

In a large bowl, beat the eggs, milk, water and salt and pepper.  Place your bread in the egg mixture and toss to coat evenly.

Cover and refrigerate up to 2 days or freeze up to 2 months.

TO BAKE and SERVE:
Thaw in refrigerator overnight if taking from freezer.  Let set out at room temperature for 30 minutes to 1 hour before baking.  Bake at 350*.   Bake for 40 to 50 minutes.  The strata should be puffy, golden and set in the center when done.  Let stand for 5 to 10 mins before serving.

MY NOTES:
*  I have left off the Parmesan cheese and drizzled butter and it has still tasted good

*  In the above recipe I use mostly mozzarella cheese, but have also used all Parmesan. And have even left the cheese out completely.

* In the original recipe it calls for the bread to have the crusts cut off of it. But not sure I have ever seen the need of that and when I made it each way - really doesn't make much of a difference.

*Stratas are good for breakfast, brunch or dinner. But I almost always serve for dinner. I add a big leafy green salad as a side.

* I mostly use French or Italian bread, but in a note in the book it just suggests any bread that isn't spongy. A bread with some structure.

*Once I needed to make it with less milk because the people I was giving it too limit their dairy intake. So I upped the eggs by 2 and did 1/2 cup of water and 2 tablespoons milk. It worked just as well as the original recipe.
Posted by danae @ 3:13 PM