It's the Breakfast of the Gods.

Well, it's the breakfast of the Chubby Gods Who Don't Want to Wear a Bikini this Summer anyway.

I don't know about the rest of you but I figure I'm never going to wear a bikini again. Therefore, we had biscuits and gravy for breakfast.

The first time I mentioned biscuits and gravy over at Under His Hand, I had a couple of folks who live over "across the pond" wondering what in the world I was doing plopping gravy on top of 'biscuits' which are the same as cookies here in the states. When it was put that way even I had to cringe. Gravy and chocolate chips? Ugh!

So, in the interest of wiping that grimace off of the face of our readers from "over there", biscuits here are not the same as biscuits there. Do not, I repeat, do NOT pour sausage gravy over your biscuits. I believe that American biscuits are similar to English scones.

But "Scones and Gravy" doesn't even sound as filling (or fattening!) as "Biscuits and Gravy". So biscuits it is.

There. Now that nothing will be lost in translation, let's get on with it, shall we? 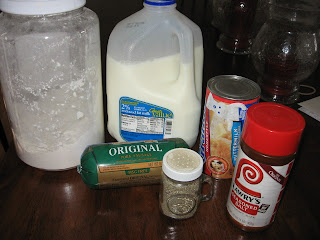 A roll of pork sausage. Hint: Ease your grocery bill and buy that cheap, generic sausage. It makes better gravy because it has more grease. You need grease. Buy the expensive stuff if you must, but you'll only end up adding "grease" in the form of butter. The grease is important!

Milk and flour. Pepper and Lawry's, or plain old salt, are optional and applied to taste.

Now, no doubt I'm tarnishing my Domestic Goddess Crown by this admission but I cannot tell a lie.

I can't make biscuits from scratch.

I have tried. And I have failed. Repeatedly.

If you possess the admirable talent of being able to pull fluffy biscuits made by your own two hands out of your oven, then do that. The rest of us will stick with the good ol' Pillsbury doughboy.

Besides, they are "just like homemade!" The little giggling bastard says so.

Step one: Crumble the sausage in a large skillet and start to brown. The size of the sausage lumps depends entirely on how chunky you want your gravy to be. My mom leaves big bite-sized chunks in her gravy. Since I'm not a big fan of hefty chunks of meat (except for Maste-.. oh.. wrong blog. Nevermind.) I'll chop mine up into much smaller pieces. 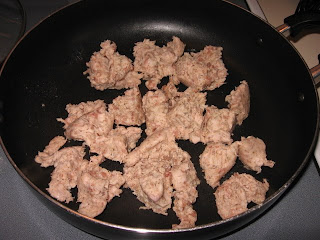 Meanwhile, make your biscuits. Or, you know, pop open that can. Whichever. 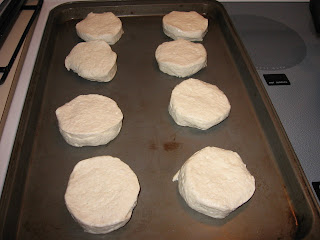 Fry the sausage until it's almost cooked through. That "almost" part is important. I'll explain that later. 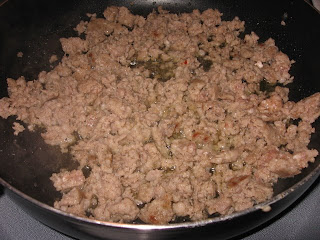 If there is not a generous amount of grease in your skillet (because you've gone uppity and used that expensive sausage), then you'll need to plop in a couple of tablespoons of butter to melt.

Then sprinkle in some flour. 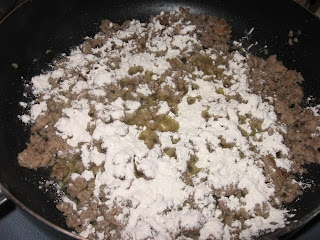 It's difficult to give a precise measurement for this because it all depends on how much grease your sausage chunks are swimming in. Start with about 1/4 of a cup and stir. 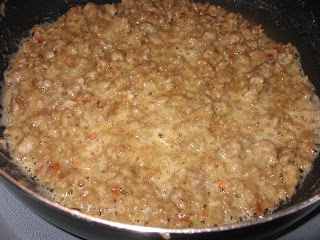 Add more if needed. The grease needs to be absorbed and the sausage pieces need to be coated with flour. 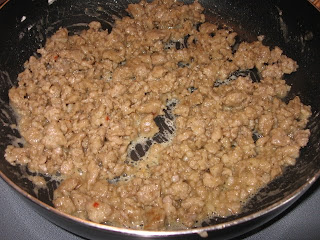 Now, this next part is the step that will make or break your gravy.

Let it fry for another 5 minutes.

This is why you add the flour when your sausage is almost, but not quite, cooked through.

If it's completely cooked through and you still have to fry it another 5 minutes, it'll be crunchy. Blech. Not inedible or anything, just.. blech. Crunchy.

This steps cooks the raw, flour taste out of the gravy. Raw flour gravy IS inedible. So, if you've forgotten and let your sausage cook all the way before adding the flour, do not try and skip this step to avoid crunchy chunks. Just suck it up, do your 5 minutes, and chew your chunks.

Let's move on then.

Next, start adding milk. Pour it on in there. Glug, glug, glug. 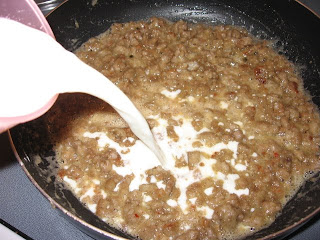 Again, it's difficult to tell exactly how much milk to use. Start with about two cups, stir and let it thicken as it simmers. Let them little buggers swim!

Don't worry. It WILL thicken. 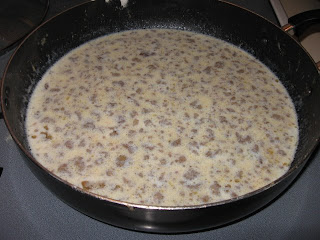 If it begins to look like sausage glue as opposed to sausage gravy, simply add more milk. In about 1/4 to 1/3 cup increments (or just kinda pour-and-pray like I do), letting the gravy simmer and thicken inbetween pours, until you've reached the consistency you prefer. All told, I probably use 3 to 4 cups of milk. 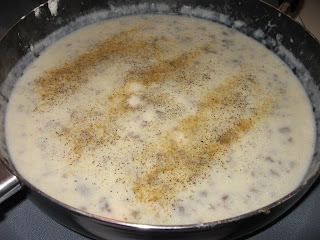 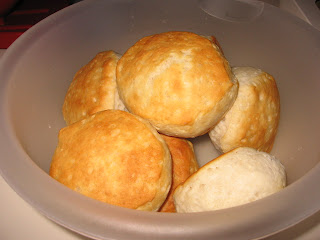 Split them and ladle the gravy over. 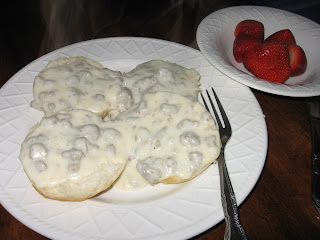 (The strawberries were added just to make it pretty. I'm not necessarily promoting the taste combination of strawberries and biscuits and sausage gravy.

Now THAT was yummy.

Serve this to your Man- 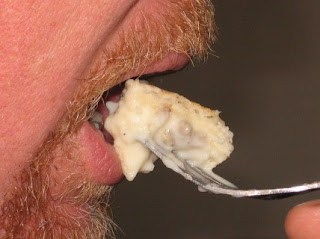 -and reap the rewards. This may or may not include permission to go shopping, new purses or many pats on the head.