The Dirt on Laundry

One of the services that I feel (and Master agrees) it is my duty to provide for our household is doing my best to pinch pennies. Being a one-income family in this economy is rough so when I come across something that saves us hundreds of dollars a year, I get pretty darn excited!

I'm not talking about giving up movie night or no longer getting to buy your favorite chocolate (that's a sin right there). In fact, there is no sacrifice at all on fun. Just one tiny 15 minute sacrifice of time per month is all you need, and an extra couple of hundred dollars will remain in your checking account!

I'm talking about every Domestic Goddess's favorite chore. It's laundry, right?! The sorting and the separating, the turning out of stinky man-socks, the pre-treating and soaking, the washing and the drying, the folding and the hanging, the rewashing of things never worn- what's not to love??

Unfortunately, I cannot help you with any of that enjoyment. I'd hate to interfere with the obvious zen-like state that laundry creates. But what I can do is ease the strain on the family budget from buying those expensive bottles of laundry detergent. Today, we're going to make our own detergent, and it will be fun and it will be easy and when you're all done, you'll be filled with a Domestic Goddess fervor. You may even want to wash windows, you'll be so pumped.

The amount of money you save will depend, of course, on what brand of detergent you normally buy and how much laundry you normally do. We have 2 adults and 3 teenagers (and 2 of those teens are girls), so you can just imagine the loads that accumulate in a day.

You know teen girls have to use 2 towels per shower because figuring out how to dry your body without letting your hair drip and get it wet again is a talent that doesn't materialize until they are paying their own laundry costs. And the suggestion of re-using a towel only elicits screams and squeals of "Eww! Guh-ross!" Another tolerance that magically appears when they move out, I bet.

Here is where I'm going to attempt to do math. I should probably warn you that I majored in Lip Gloss and Cruising With Boys while in high school-- not in math. Pardon my elementary mathematical equations and if I don't do it right, don't tell me. I like thinking I'm saving money, k? Thanks.

That's a big savings, and I have not compromised the cleanliness of the clothes or the function of my washer. I don't have one of those fancy-shmancy high efficiency machines, though from everything I've read about this homemade laundry soap, since it's a low-sudsing concoction, it works very well in them.

Here's what you'll need to get started. 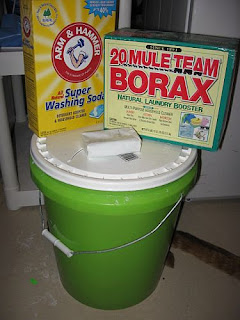 Now, this is the most expensive part right here- buying the supplies. But even at that, you're going to spend less to buy these supplies than you would on your average name-brand laundry soap.

The Arm&Hammer washing soda will likely be the only ingredient that gives you trouble as it can be difficult to find in stores. Make sure you read the box because there is an Arm&Hammer laundry detergent, but that is not what you need. You need Super Washing Soda. If you can't find it, do like I do and order it off the internet. Or ask your local store to order some.

The Borax is generally carried in most stores, and I got my bucket (mah bukket!) at Wal-mart for under $5.00.

The type of soap you need is dependent only on your preference for smell and your tolerance to the perfumes and dyes in it. Right now, I'm using Coast simply because it's what I have on hand. I've heard that Fels Naptha is terrific for use in this laundry soap, though I've never used it myself. Ivory also works well, though Ivory gave my son a skin rash. I don't know of any soap that cannot be used.


Here's what you do.

On the internet, you'll find varying recipes for making this soap. Though the ingredients remain the same, the measurements of each seem to depend on who's making it. I'm going to list how I do it, but feel free to adjust the amounts as you think your clothing and/or skin needs require.

Fill a pot with water and place it on the stove to heat. As it's heating, grate your 1/2 bar of soap into the water. Let simmer and stir occasionally until the soap shavings are completely dissolved. You'll end up with some super-seriously soapy water.

Meanwhile, in your 5 gallon bucket, measure in one cup each of the Super Washing Soda and the Borax. Once your hot soapy water is ready, pour that into your bucket and stir until all of the powder is dissolved. Then, simply continue to add hot tap water to your bucket, stirring after each addition, until the water level is an inch or two from the top. Let it cool overnight, and voila! One 5-gallon bucket of laundry detergent.

As it cools, it'll turn into a watery gel. I keep a giant spoon in the bucket and just give it a vigorous stirring to break it up. It's kind of fun in that childish, oh look I have slime! kind of way. 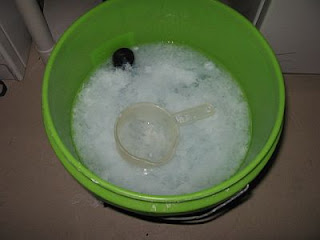 I use one cup per load and one bucket seems to last me forever and a day. I get about 80 loads per bucket of soap, so, at an average of 21 loads per week, I have to mix this up just about once a month.

I can't break down how many buckets you'll get out of your one box of washing soda and your one box of Borax (back to that math deficiency of mine that I told you about) but I can say that in the last year, I've used less than 2 boxes of each. At just about $2.50 a box, I'm still under $10.00 total for the two main ingredients.

If you prefer powder soap to liquid, use your same ingredients minus the water:

Stir together, use just 1 tablespoon per load.

If you prefer a scented laundry soap, simply add a few drops of your favorite essential oils. Be careful that your preferred scented oil doesn't clash with the bar soap you've used though.

So there you have it. Go forth and launder!