I love using the crockpot in the summer because it doesn't heat up the kitchen as much as using the oven.  I also can put stuff in and let it cook all day and not have so much of a rush around dinner time.

I found this recipe via Pinterest but I am not linking to the recipe as there were SO MANY blogs that posted this recipe and all of them were just a little bit different.  So I just kind of  pulled things from several of the recipes to get this version.  I have to say when I first started seeing this on Pinterest, I was thinking it looks so good that I was ready to make in the moment but when I looked at the ingredients I was stopped up short because one of the ingredients is ketchup.  I just couldn't imagine the combination of ingredients would work well.  But it worked. It doesn't taste like ketchup and honey in the end. It just has a slight sweet flavor but it is hard to tell where that flavor comes from exactly. Master loved this - he was saying  "more" - instantly after eating a serving of it. He said he wants me to make it again soon.  We did also notice that the flavors got even better the next night.  It was really good the first night, but it was even better with the second night. 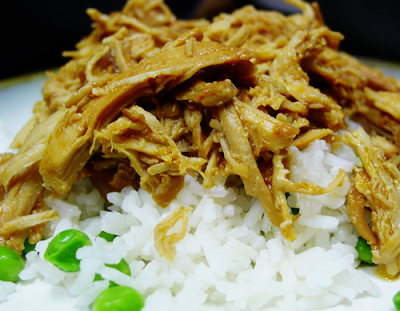 Directions:
Put chicken into crock pot. In a small bowl, combine honey, soy sauce, onion, ketchup, oil, garlic and hot sauce/pepper flakes. Pour over chicken. Cook on low for 4-6 hours or on high 3 – 2 hours, or just until chicken is cooked through. Shred chicken. Stir to combine with sauce. Replace lid and cook sauce on high for ten more minutes or until slightly thickened. Serve over rice or noodles.

NOTES:
I served with rice that I tossed with some steamed peas.  This doesn't make much sauce so if you are wanting more - I would I think add some chicken broth towards the end with some cornstarch to thicken it and mix with the other sauce already in there to get flavor.