I  made pie yesterday - pumpkin because I had several cans of pumpkin in my pantry that I want to start using. But  I really wanted to make this pie because I have been craving it.  I love all things Snickerdoodle.  This pie is very good - but it is more like a cake in a pie crust.  It is a good  pie for autumn and winter. 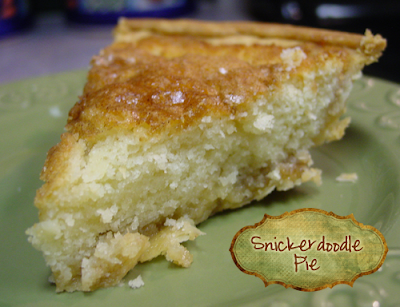 4. Slowly pour syrup over the filling in pie plate. Sprinkle with remaining cinnamon-sugar mixture. Cover edges of pie with foil.

5. Bake pie 25 minutes; carefully remove foil. Bake about 20 minutes more or until top is puffed and golden brown, and a toothpick inserted near center comes out clean. Cool 30 minutes on wire rack. Serve warm or at room temperature. Makes 10 servings.