Kitchen Tips: Cinnamon Sugar and other odd things my Grandma taught me 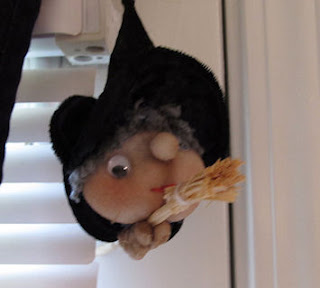 I've been wracking my brain trying to come up with material for a post and finally hit upon one the other day. It started with a simple recipe that called for a mixture of cinnamon and sugar to be sprinkled over the top of my fresh peach cobbler.

I find myself using my shaker for more than just toast. Sir will sometimes sprinkle his cereal with the mixture, or when I'm baking, I'll sprinkle some over the top of what I'm making, like the peach cobbler from the other night or anything that suggests a sprinkling of sugar on top. Suggested ratio is 1 teaspoon cinnamon for every tablespoon of sugar, but you can tweak to your liking.

I was thinking about other tricks I got from Grandma and I realized, she's all over my kitchen.

* I keep a bag of onions that I've chopped up in the freezer to save time. Along the same line, I freeze ginger root to make it last longer and easier to grate into recipes.

* When I make things in the Crock Pot, I turn the pot on low while mixing the sauce then add the meat, makes the wet ingredients blend better.

* I also keep a shaker of baking soda near the sink to help wash off fruits and veggies. (ok, this one didn't come from Grandma, but from Aunt Phyllis!) It's also good for cleaning off cutting boards and scrubbing pots and pans too.

* Fresh herbs from the garden always taste better store bought. So I have a small herb garden out back where I have Basil, Oregano, Mint, Thyme, Rosemary and Sage. I pick them at the end of the season and dry them to use through out the winter.

* When making sauce or other liquid based dishes to freeze, drape a large freezer bag over the rim of a small mixing box, it makes it easier to fill.

Those are just the tips I can remember off the top of my head. My little Kitchen Witch up there is a reminder of my Grandma Pearl, she always had one in her kitchen. It was said that if the witch was facing towards the kitchen, then it was your turn to cook dinner, if her bottom was facing towards the kitchen, go out to eat! I named her "Pearl" after my Grandma.
Posted by Rheya @ 12:17 PM