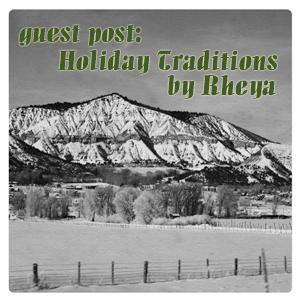 Most of us are familiar with the idea that eating Black-Eyed Peas on New Year’s Day is supposed to be lucky.
How about some other New Year’s Traditions and Superstitions?

• First Footer – If the first person to cross your threshold is a dark-haired man, it is supposed to be good luck. It is BAD luck if the first footer is a woman. Also it is considered lucky if visitors on New Year’s Day come bearing gifts, bringing prosperity to the household they are visiting. Conversely, nothing should be taken from the home on New Year’s Day (which makes me wonder where you are supposed to store the items you are taking to friends??)
• Along these same lines, your pantry should be stocked, your wallet have money and you should wear new clothes on New Year’s Day. A full pantry and wallet ensure you will want for nothing in the coming year, the new clothes, especially red, ensure good fortune.
• A favorite tradition of mine is that a few minutes before midnight, I open up all the windows in the house, to let the bad luck from the previous year flow out and good luck for the new year flow in.
• Do some work, but not dishes or laundry. Doing work shows that you are willing to work during the new year, but washing dishes or laundry is said to foreshadow a death in the family. However, do not start a big project on New Year’s Day.
• Baba Jaga (or Yaga) – Now I haven’t been able to find anything on this particular tradition, but I remember it from my childhood. My Polish step-grandmother used to say that on New Year’s it was good luck to make a Baba Yaga figure and put it on the front door. Baba Yaga is a witch in Slavic/Russian tradition. She is sometimes seen as an old hag who steals children, but is often portrayed as someone who you seek out for wisdom and guidance. My own Baba Yaga is a Styrofoam ball covered in strips of cloth, with a handkerchief tied around her head and buttons for eyes.
• My favorite New Year’s tradition is one that is said to bring luck and wealth. You burn a bayberry scented candle and while lighting it say the following charm.

A bayberry candle when burned to the socket,
Brings luck to the home and money to the pocket!

• All Holiday decorations should be taken down by January 5th, which is the 12th Night or 12th Day of Christmas (remember the song?)
• I mentioned black-eyed peas, but how about some other New Year’s Foods? The following foods consumed on New Year’s Day are all said to bring luck:

How about a few recipes?

Traditionally served with ham hocks, I found a recipe that was slightly quicker and easier!

Place the sausage and onion into a large saucepan over medium heat, and cook and stir until the sausage begins to brown, about 10 minutes. Stir in the black-eyed peas, chicken stock, water, and spices, and bring to a boil, simmer till reduced Serve over Rice.


I had a hard time finding a chiacchiere that matched what I remember my grandmother making. Everything I found dusted them with powdered sugar or chocolate chips. Also, she never called them chiacchiere, but crostoli. I found out doing my research that different areas of Italy refer to the pastries by different names. The EASIEST way to celebrate would be to buy some Stella D’oro Palmiere cookies. These are the closest to what I remember Grandma’s tasting like (and my aunties used to buy them as treats for us when I was younger!)

However, if you really want to make your own…

Combine flour, salt and melted butter in large bowl. Add eggs one at a time and mix well. Add wine or grappa if desired. Let dough stand for about 1 hour, covered.

Roll dough into 1 inch balls, then roll out into a circle or rectangle


My name is Rheya. If you would have asked me 20 years ago if I saw myself cooking, cleaning, sewing and serving the needs of another over my own, I would have told you to get your crystal ball checked. I was not a girl whose idea of bliss was being domestically oriented. I shunned Home Ec! A lot can change can’t it? I’ve found my happiness though in just that, domestic service. I currently live in an area south of Atlanta. I work outside the home, so balancing the two is always a challenge. But I try to manage it all with a smile on my face and remember that everything I do is for His honor.

NOTE from Danae: I am very excited to announce that this will Rheya's last "Guest post" as she will be an official Domestic Servitude blogger.
Posted by danae @ 1:28 PM