We have ham at Christmas time and then I freeze the ham bone to make Ham and Bean Soup. Mine turns out really thick though more stew consistency than soup. I am not sure I have ever had ham and bean soup that was really soupy so not sure if I am doing it right or not but it tastes good.

Since we weren't here on Christmas though we had ham later so that I could still make Ham and Bean soup. And although we have had some spring-like weather - I know it will be cold again before spring actually gets here. So that cold weather will call for warm comfort food such as Ham and Bean Soup.

I use the following brand of beans and they used to have 15 bean mix with the ham flavoring packet it in it. But they have a Cajun packet in it now.* So I switched to the Great Northern Beans. And have done it with the great northern before I just prefer the 15 bean mix. I get this brand of beans at Wal-Mart but have seen them at other grocery stores too.

*Editing at 11:13 - I was just at the store and they have the 15 bean mix back! Of course after I already had the great norther but as I said they taste good too. 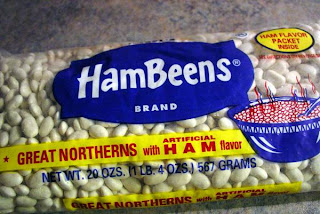 Soak beans over night in water. Rinse and remove debris before using. Add all ingredients to slow cooker. And cook for 6 to 8 hours until beans have reached the desired tenderness. Take out bone and if any meat still attached shred into pot. Remove bay leaf. Serve. 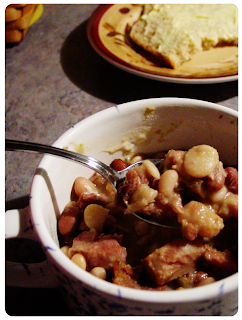 * Carrots and celery are optional ingredients because often I just use what I have on hand. And sometimes I don't have them and the ham and bean soup taste just as good.

* If it is too watery for you, take out 1/4 of a cup to 1/2 cup of beans and smash them. Add a little flour to the beans and then mix in some water or milk before adding back into the crockpot. It usually takes 15 to 30 mins for it to thicken up some.

* If it is too thick, add more water.