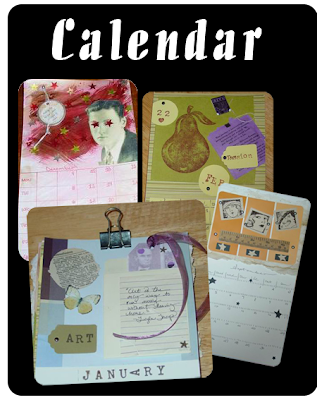 One year I made a calendar for some friends. This took a while but it could have been simplified by doing just a single image - such as stenciling a trio of leaves on a piece of tweed fabric, cutting them out and gluing them down on the card stock for November. Really this idea could be implemented in so many different ways - using photos, paints, rubber stamps, fabric, quotes, scrapbook supplies, the computer (such as photoshop) or whatever you have around your house. I used card stock as the base and then just let my imagination go. After I was done, I just used a binder clip to hold them together and it also can be hung on the wall by that.
Posted by danae @ 10:22 PM