No no, put your box of kleenex down. This isn't a lesson on stuffing your bra (maybe later though, huh?!). But I do have recipes for spicing up plain old chicken breasts by stuffing the heck out of them.

The possible ingredients for stuffing your boobs are almost endless and the process doesn't change much. You just smash, stuff, roll, and bake! Easy-peezy-lemon-squeazy!

First, prepare your chicken breasts. One way to get super moist chicken is to brine it before cooking. To make enough brine for 4 chicken breasts, combine about 2 cups of water with 1 tablespoon of sugar (white or brown) and 1 tablespoon of kosher salt. Let thawed chicken soak for about an hour in the fridge. I have made these without brining and it's still good, though.

To try and keep my work space as clean as possible, I avoid splattering raw chicken juices around the kitchen by wrapping the thawed breasts in saran wrap that has been lightly sprayed with cooking spray. The spray prevents the plastic wrap from sticking to the chicken while you pound it, while the plastic wrap contains most of the juices.

Lay them on the counter and pound the bejesus out of it with a meat mallet. If you don't have a meat mallet, try using a can of vegetables or the bottom of a large heavy glass. This is the most therapeutic part, btw- the chicken breast mangling. Take out all of your frustrations. Just don't take out so many frustrations that your breasts begin to disintegrate and fall apart as that makes the stuffing and rolling part difficult (but darn it sure felt good!). You want them flat and uniform in thickness for even cooking.

Take your newly flattened breasts and trim off the undesirable parts, if you want. This part is entirely optional, but I like to snip off all those dangly white pieces because I don't really know what they are.

Lay the breast flat on a plate, and spoon in your desired stuffing ingredients. Roll the chicken breast up like a jelly roll and secure it with toothpicks. At this point, depending on what your stuffing is, you'll dip it in melted butter and roll in bread crumbs or pour a creamy soup over them or something.

Place seam side down in a baking pan and bake at 350F for about an hour. Or 400F for 30 minutes. Or whatever time and temp you think will cook your chicken the best. It really depends on how flat you've made your chicken and how thick your rolls are. Use a meat thermometer (165F) or cook until the chicken is no longer pink and juices run clear. 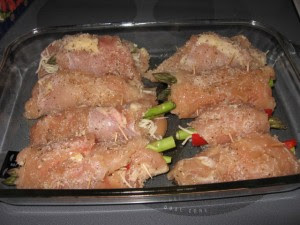 Mozarella cheese and asparagus, with pasta and alfredo sauce. This is a personal favorite of ours.

For a serving of four, mix 2 tablespoons grated Parmesan cheese with 1 teaspoon dried Italian seasoning (or your seasoning of choice) and sprinkle this over your flattened breasts.

Boil the asparagus for just one minute and then lay one or two stalks on your chicken.

Add cheese. I find that using cheese sticks works really well. One cheese stick per chicken breast is the perfect amount of cheese, but I've also used cubed and shredded.

Roll it up, secure it, dip in beaten egg and roll in seasoned bread crumbs. Bake at 400F for about 30 minutes. After baking, pour warm alfredo sauce over chicken, serve with pasta. Yum.

My son recently asked for mashed potato and corn stuffed chicken. I haven't tried it yet but I think it would be awesome. Maybe topped with a can of cream of chicken soup to make a gravy? Nom!

To retain moisture, just make sure you've either dipped the rolls in egg/melted butter and rolled in crumbs or have poured some sort of soup/gravy over them. Otherwise, I think they would be dry and bland. But your stuffing/gravy/seasoning combinations are only limited by your tastebuds and imagination.

But doesn't it look so good? 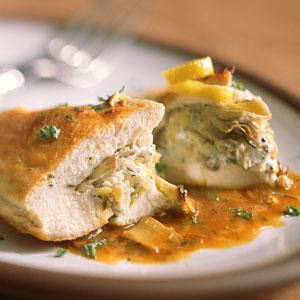