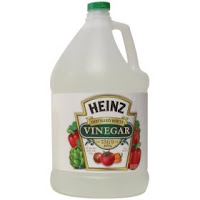 We have 2 cats and our one cat has been known to get in the trash and drag out bones or just packaging for chicken or other meat.  Such as when I make chicken and throw the packaging away, he will jump up and pull that packaging out of the trash and lick it. GROSSES me out so much! Not only that he is licking the chicken package that had raw chicken in it hours before, but then he might step in it and then track that juice all around the house.  Yep grosses me out and I can't think about it too much or I really go into OCD type cleaning.

I got to a point of putting any meat packaging or bones into a plastic grocery sack and bringing them out to the trash cans outside after, but well that can be annoying as well as we then had other animals get into trash outside, because it is easier to get to in little grocery bags. The smell seems to be attract them more easily when they are in grocery sacks instead of the big kitchen trash bags.

So I tried a couple of things, like thoroughly washing the packaging before throwing it away. It was in doing that I looked over and saw my vinegar spray bottle sitting on the counter.  I had noticed when I spray that over the counters when I wipe them down before bed - it keeps the cats off the counter while we sleep.  I thought why won't it work for the trash. Now I just throw the packaging into the kitchen trash can and then spray it thoroughly with straight distilled white vinegar right after throwing it away.  If it something our boy cat especially enjoys, I will give it one more spray before bed, but really once the packaging has been coated with the vinegar the first time, he doesn't like to touch it.

I did google to make sure vinegar is safe for pets and then asked a vet tech to make sure and she said it used often with pets in a variety of situations.
Posted by danae @ 8:30 AM