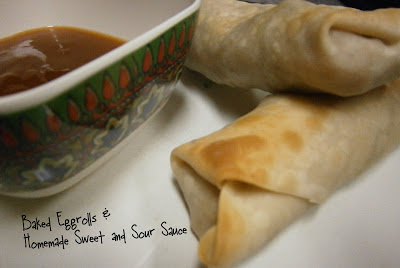 I have been craving eggrolls, but Master doesn't like eggrolls because he doesn't like cabbage. So I came across a recipe that still had cabbage, but had quite a few other veggies in them so that inspired me to figure out a way that Master might eat an eggroll or two.

Last winter I made some chicken thighs in the crock pot with teriyaki on them and decided to make wraps. Instead of lettuce or tomatoes as a topping in the wraps, I used a bag of shredded broccoli slaw. I didn't mix it into slaw, just used the raw ingredients to top our wraps and it was really good.  Broccoli slaw has some cabbage in it, but very little so Master can usually put up with it as the other flavors are so much more pronounced.  He really enjoyed the broccoli slaw on the wraps so thus came the idea of using broccoli slaw for eggrolls instead of nappa cabbage. They turned out pretty good. He enjoyed them and said he would have them again.

Baked Chicken Eggrolls
2 large Chicken breasts cubed and sauteed in 1/4 cup of teriyaki sauce and 2 tablespoons of soy sauce. After chicken is cooked through, add 1 bag broccoli slaw  &  1/2 cup sliced green onions.  Add 2 tablespoons teriyaki and 1 tablespoon soy sauce if the liquid has been absorbed into the chicken.  Cook until veggies are just underdone as they will cook some more when you bake the eggrolls.

Preheat the oven to 400 degrees F. Spray a cookie sheet with cooking spray. Place 1/4 cup of the mixture on the middle of an eggroll wrapper, turned like a diamond. Fold the bottom corner up, over the filling. Fold in the two sides, then roll upwards. I didn't have a problem with them sticking or staying closed, but if you do put a dab of water on the corner to help it stick. Place on the pan seam down.  Repeat until you run out of the mixture, about 15 to 20 rolls.

Place eggrolls on cookie sheet, they can be close, but not touching. Brush the egg rolls on all sides with the vegetable oil. Bake for 12 to 16 minutes or until lightly brown and crispy. Serve with sweet and sour sauce.

In a small bowl, whisk together cornstarch and water. Set aside.  In a medium saucepan, combine orange juice, rice vinegar, brown sugar, ketchup, and soy sauce and bring to a boil over medium heat. Take a tablespoon of the hot mixture and stir into the cornstarch slurry. After well mixed pour it into the saucepan. Cook until thickened, about 1-2 minutes. Remove from heat and use immediately or store in an airtight container in the refrigerator for up to two weeks.
Posted by danae @ 8:44 PM