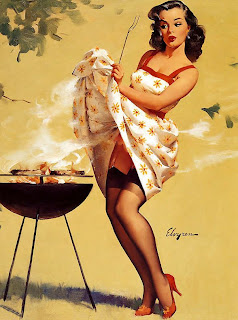 Confession time: I'm nearly 40 years old and have never cooked a whole chicken or turkey. Turkey breasts I've done several times. Never a whole bird. I'm seriously squicked out by the though of sticking my hand, to quote a friend "up a chicken's hiney".

But I figured it is a good idea, will generate left-overs and come on, I need to get over it.

So I bought a small bird for Sir and I and gave it a try. Here's my recipe and the running narrative of things I wasn't expecting.

Mix the lemon and rosemary and rub under chicken skin, all the way down to the thighs
Huh? How do I get under the skin? Hmmm... ok, so if I take a knife and cut a small slit. Hey there we go. But there's this membrane holding it to the bird, better break that first. Ok! Now we're doing good. Woot1 Go me! Crap, I ripped the skin a little, so let's skewer it back together. Damn that doesn't work, better just skewer it down to keep the lemon from falling out

In a saute pan, heat 2 tbsp olive oil over medium heat. Saute onion, apple, fennel, thyme and orange peel. When cool enough to handle stuff the bird.
What's cool enough to handle? Hey what's this packet in here? Oh right, the giblets, better remove that. Hmmm I wonder if I have to stick my hand in or if I can just spoon stuff into there?

Skewer ends of the chicken together (I used toothpicks).

Roast for 90 minutes at 350 degrees, basting every 15 minutes with chicken broth.
Ok! 15 minutes down, better baste the chicken. Hmmm it's browning kind of fast. I think I'll try to cover it with tin foil.

Ok, it's time for the second 15 minute basting, how are we doing? Smells great. Uh oh, the oven is heating it unevenly, I better turn it half way around to keep it cooking evenly!

Halfway there, I better check the internal temp, my oven cooks fast and my chicken wasn't 3 lbs. I'm not crazy about how the skin is turning out. Maybe I should have basted it with softened butter mixed with chicken broth? Internal temp is 150 degrees. I'm about halfway there. I need it to be 170 before it's "done".

30 minutes left, maybe I should take off the tin foil now to brown up the rest of the skin a bit?


Just a note here, to take a chicken or turkey's temperature, stick the thermometer in the thickest part of the meat. This is generally in the thigh area between the drumstick and the body.

Take the temperature when you baste to determine how fast your chicken is roasting. My oven doesn't always follow "recommended" cooking times. I ended up cooking this for just about 5 minutes shy of 90.

Also, have a good thermometer. I recommend an instant heat one!

Also, just because the chicken is bloody when you cut into it, doesn't mean it is underdone.

As an additional note, you may not want to do a different baste on it after all, the chicken gets crispy, but would be probably be bitter to eat because of the lemon right up under it. But if you like that, go ahead!

This recipe turns out moist and juicy and fall apart tender!

And here is the finished product: 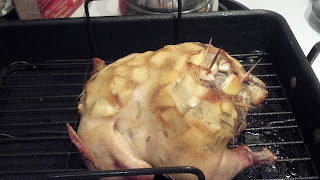