Master has a thing for waffles. It's his breakfast of choice, choosing to eat that about 5 mornings out of 7. For awhile I was making them with a standard waffle mix (Aunt Jemima or some such something), but then I got all caught up in the white-flour-is-teh-debil! craze that swept the nutritional world and started buying frozen Kashi whole-grain waffles.

Because I need to keep him as healthy as possible, you see. I'm totally not done with him yet!

Master was not a big fan of Kashi, evidenced by referring to them as "that cardboard shit you're feeding me for breakfast". And though I may have told him to "suck it up, buttercup", the outrageous price of frozen Kashi whole grain waffles offended my cheap-skate sensibilities.

There were 8 in the package, for somewhere between 3 and 4 dollars a box. And because they're small (standard size for frozen waffles, but at 6'4" and 220lbs, Master is not a standard size guy.) he'd eat two waffles a serving, so, 4 servings a box.

I went on a mission, not only to find something cheaper and just as healthy, but to also, hopefully, move out of the cardboard category.

In a small mixing bowl beat egg yolks, milk, vanilla and applesauce (and cinnamon, if using). Add to the flour mixture all at once. Stir mixture until blended.

(I have no idea why the recipe calls for beating the egg whites separately, but we are not to question such things! Just do as you're told, like the good little submissive you are.... :P) 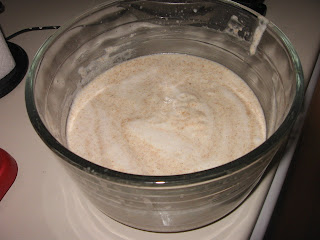 Pour batter onto preheated waffle maker which has been sprayed with non-fat cooking spray. Cook according to your waffle maker's directions.

The recipe site I got this from listed this as 5 servings with a calorie count of 216 per serving.

Well! I beg to differ!

I got 13 waffles out of this recipe, and a single waffle for us is a serving. I mean, jeez, they're huge! 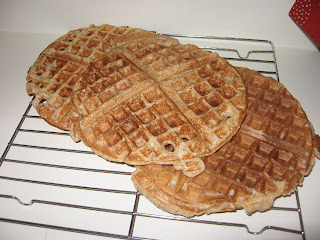 So my new estimated calorie count for these is right around 100 calories, plus whatever your topping of choice is.

(The recipe analyzer also said there was alcohol in the recipe and damn if I can figure that out. Though I do cook with wine, and I sometimes even add it to the food, I most certainly did not add any to the waffles!)

I couldn't even begin to break down the cost savings as I had quite a few of the ingredients on hand. The only thing I had to buy was the bag of flour and a jar of applesauce, which totaled less than a single box of Kashi, and I'll get who-knows-how-many batches out of them.

I flash froze the waffles, stacked them separated with flattened out coffee filters because I was out of any other non-sticky food separator stuff, popped them in a freezer bag and called it Domestic Service.

To serve, I cut them in half, pop them in the toaster and voilà! Healthy(-er than white flour) and cheap(-er than Kashi) whole wheat waffles, that, best of all, have been declared "better than cardboard!"